AMARANTH MAY HAVE CANCER-PREVENTING, ANTI-INFLAMATORY PROPERTIES
Molecular biologists in Mexico set out to study the bioactive peptides in amaranth and, in 2008, were the first to report presence of a lunasin-like peptide in the protein in amaranth. Lunasin is a peptide previously identified in soybeans and is widely thought to have cancer-preventive benefits as well as possibly blocking inflammation that accompanies several chronic health conditions such as diabetes, heart disease, and stroke. Additional bioactive peptides in amaranth protein were found to have antihypertensive properties.
Journal of Agricultural and Food Chemistry, February 27, 2008; 56(4):1233-40. Epub January 23, 2008.

AMARANTH BENEFITS PATIENTS WITH CARDIOVASCULAR DISEASE
Russian researchers used a 1996 study conducted on chickens as a model to determine whether or not amaranth would also show benefits for patients with cardiovascular disease (CVD). Patients who presented with coronary heart disease and hypertension not only showed benefits from the inclusion of amaranth in their diets, researchers also saw a decrease in the amounts of total cholesterol, triglycerides, and LDL significantly.
Lipids in Health and Disease, January 5, 2007; 6:1. DOI:10.1186/1476-511X-6-1.

COMMONLY GROWN AMARANTH HIGHEST IN PHYTOSTEROLS
University of Guelph researchers in Ontario, Canada found that amaranth can be a rich dietary source of phytosterols, which have cholesterol-lowering properties. Of the four varieties tested, the top results came from Amaranthus K343, often called Plainsman, the most commonly cultivated amaranth 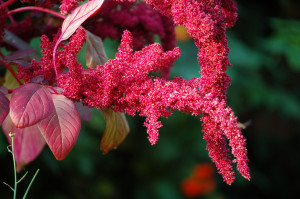 AMARANTH LEAVES OFFER POTENTIAL HEALTH BENEFITS
Australian researches conducted a study focusing on Greeks who relocated to Melbourne but maintained their traditional Mediterranean diet. During this study, the foods selected for nutrient evaluation – leafy green vegetables, figs in season, and various types of olive oil – were those commonly consumed by Greeks living in Melbourne, but not by native Australians. Of all the commercial and wild leafy greens studied, amaranth leaves were found to contain some of the highest levels of beta-carotene and lutein, even higher than the commercially available chicory and endive.
European Journal of Clinical Nutrition, November 2002; 56(11):1149-54

Researchers from the U. S. Department of Agriculture in Madison, WI conducted studies that showed the healthy oil in amaranth could significantly reduce total cholesterol and LDL (“bad”) cholesterol in 6-week-old female chickens.
The Journal of Nutrition, August 1996; 126(8):1972-8

AMARANTH’S PROTEIN IS CLOSE TO ANIMAL-BASED PROTEIN
The Institute of Nutrition of Central America and Panama in Guatemala conducted a comparative study between the protein in amaranth and cheese protein. Researchers concluded that the protein in amaranth is among the most nutritious vegetable-based protein and can be considered on par with protein from animal-based products.
Plant Foods for Human Nutrition, March 1993; 43(2):123-43

AMARANTH’S PROTEIN IS ESPECIALLY GOOD FOR CHILDREN
Researchers in Peru fed toasted amaranth flour, popped amaranth grain, and amaranth flakes to young children as the source of all dietary protein and fat, and as 50% of their daily energy requirements. Later, children were fed a mix of amaranth and corn in various flour, flake, and meal forms. Results showed that protein uptake from amaranth flour was favorable, and combining amaranth with corn provided for better protein uptake than consuming corn alone.
The Journal of Nutrition, January 1988; 118(1):78-85

Some other additional health-related tidbits about amaranth:
– Grains of amaranth are 5% to 9% oil, which is higher than other grains but may also account for its increased levels of cholesterol-lowing properties
– The grain has a potential use as a source of squalene oil, a fatty compound often used in vaccines