A grain trade 2000 years before agriculture 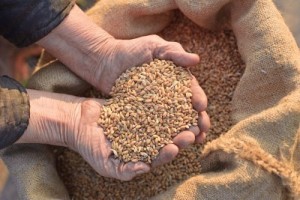 The ancient inhabitants of Britain began to consume wheat grown about two thousand years before agriculture came along on the island, importing it from the mainland. This discovery, made ​​by researchers from the University of Warwick, Bradford and the Department of Marine Archaeology of the National Oceanography Centre in Southampton, indicates that the relationship between hunter-gatherers and early farmers were obviously more complex than expected, and not just confrontational.

The result obtained by Oliver Smith and colleagues, described in an article published in ” Science “, is the result of genetic analysis of plant remains discovered in the ancient site of the Mesolithic British Bouldnor Cliff. The site currently rests under marine sediments off the coast of the Isle of Wight, but at the time, when the sea level was lower, it was on the mainland.
Under the sediments, in a layer dated to about 8,000 years ago covered by a peat bog, are the remains of wooden instruments worked, burnt flint, nut shells and plant residues, of which the researchers analyzed the ancient DNA, discovering the unexpected presence of grain.
Although already 10,500 years ago, groups of farmers of ancient Anatolia could count on domesticated plants and animals, farmers arrived in the Balkans only between 8000 and 9000 years ago, and then spread westward across the Mediterranean and north along the Danube and reach the Western France and the Rhineland about 7500 years ago. The first evidence of the cultivation of cereals in Britain dates back to 6000 years ago, much later than the other side of the Channel.

The new discovery disproves the idea that the islanders did not consume wheat but indirectly confirms the delay in the adoption of agriculture. DNA analysis has in fact shown that the variety of grain domesticated found was typical of the ancient cultivation in the Near East, genetically distinct from those that characterized the spread of agriculture in Northern Europe and in Britain itself.

The conclusion that it was imported commodities is further supported both by the absence of any archaeological due to agricultural practices, either – and even more – by the total absence of pollen grain in sedimentary layers analyzed.