The plant has a branching root system with one primary root that reaches deeply into the moist soil. Buckwheat has triangular seeds and produces a flower that is usually white, although can also be pink or yellow. Buckwheat branches freely, as opposed to tillering or producing suckers, causing a more complete adaption to its environment than other cereal crops. The seed hull density is less than that of water, making the hull easy to remove.

Buckwheat is raised for grain where a short season is available, either because it is used as a second crop in the season, or because the climate is limiting. Buckwheat can be a reliable cover crop in summer to fit a small slot of warm season. It establishes quickly, which suppresses summer weeds. Buckwheat has a growing period of only 10–12 weeks and it can be grown in high latitude or northern areas. It grows 30 to 50 inches (75 to 125 cm) tall. 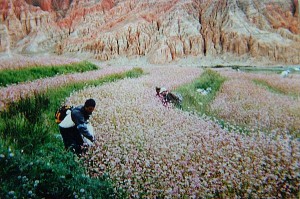 In the northeastern United States, buckwheat was a common crop in the 18th and 19th centuries. Cultivation declined sharply in the 20th century due to the use of nitrogen fertilizer, to which maize and wheat respond strongly. Over 1,000,000 acres (400,000 ha) were harvested in the United States in 1918. By 1954, that had declined to 150,000 acres (61,000 ha), and by 1964, the last year annual production statistics were gathered by USDA, only 50,000 acres (20,000 ha) were grown. However it may benefit from an “explosion in popularity of so-called ancient grains” reported in the years 2009-2014. Let’s see now some data about present-day buckwheat production, updated in november, 2014.