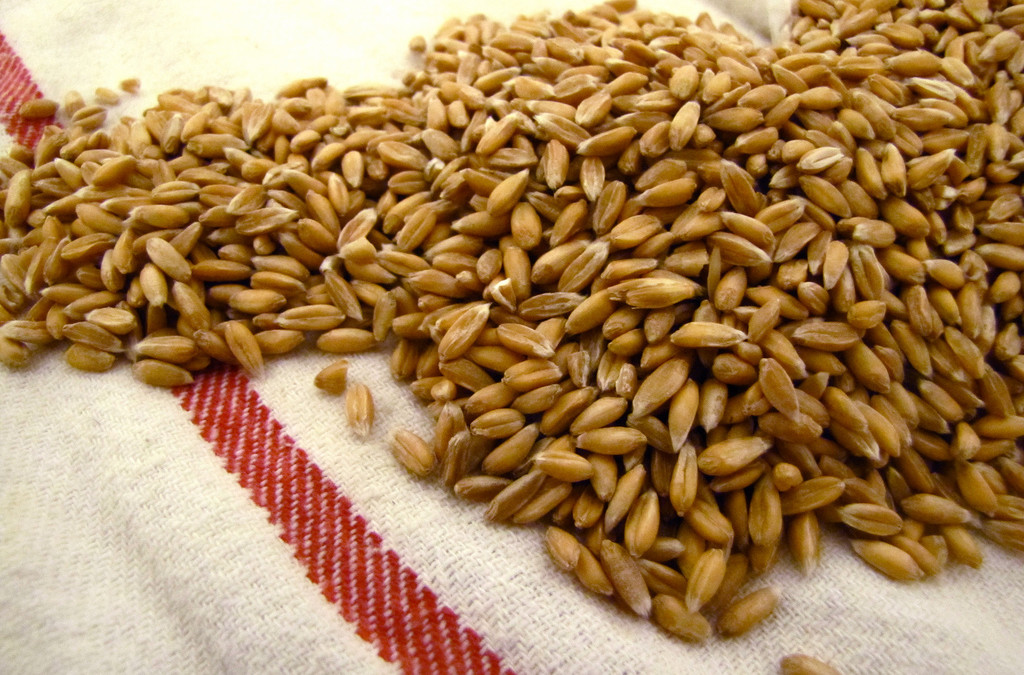 The history and origins of spelt are somewhat confused and complex. There is evidence that spelt was cultivated by ancient civilizations both in Europe and the Middle East thousands of years ago. It is mentioned in the Old Testament and in various Roman texts. Carbonated grains of spelt have been found throughout Europe including Britain, in many Stone Age excavations. Its poularity remained widespread, especially in Eastern Europe, until the end of the 19th century. German records of one region, dated 1850, showed that 94 percent of the cereal acreage was producing spelt and only 5 percent producing bread wheat. The rapid fall from favour of spelt was mirrored by rapid developments in modern farming. Once combined harvesters were introduced which could harvest common bread wheat in a single process it would have no longer been so attractive for farmers to continue to grow spelt. This is because each individual grain of spelt unlike common wheat is covered by a tough outer husk which reqires removal in a further process before the grain can be milled into flour.

Fortunately spelt was not entirely lost to mankind and in the mid 1980’s it was rediscovered in Europe and has undergone a major resurgence in many parts of the world ever since. However for this to

happen, special machinary which could dehull individual spelt grains in commercial quantities needed to be introduced into the chain of production for making flour. However by this stage it was realised by those taking the lead in this renaissance that the time and cost of having to do this was far outweighed by the advantages to both farmers and consumers of resurrecting this ancient grain.

In United States, Spelt was brought by Swiss Immigrants to the Eastern Ohio and from that time spelt was a very common grain grown for hundreds of years throughout the United States. During the 20th Century, it was almost completely abandoned for the more modern varieties of wheat which had a higher yield, shorter growing season and better resistance to disease. In Europe, especially during the Middle Ages, Spelt was grown for human consumption and also animal feed. In United States, until recent times, Spelt was grown mostly as feed. However, since the mid 1980’s, Spelt has made a real inroad into the health food market as a wheat substitute.
As for The Australian spelt story, it started in 1988 after a farming couple from NSW heard about the revival of the spelt crop in Europe. The idea of growing spelt in Australia interested them so they obtained about 50 seeds from a European seed bank. The spelt turned out to be relatively easy to grow there and after four years of harvesting with a pair of scissors they were able to build up a seed stock. Eventually their crop bcame a commercial reality when, after building their own special machine for dehulling the grain, they began milling it into flour for sale to wholesalers and bakers. Today the sales of spelt are skyrocketing as consumers happily rediscover the pleasure of eating spelt and learn about its nutritional benefits.